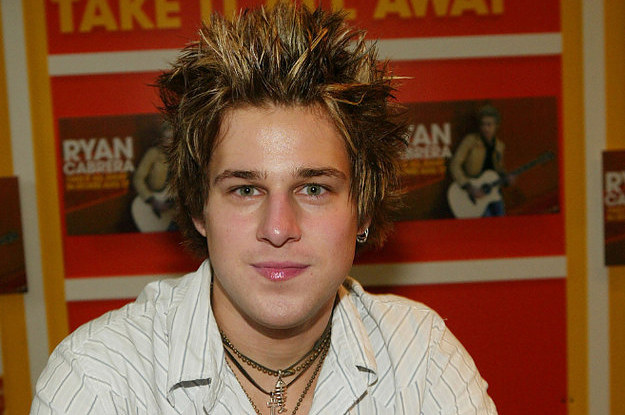 Be honest, when was the last time you even thought about Ryan Cabrera?

Biggest claim to fame: Aside from being a prolific philosopher, he also happened to date Audrina on The Hills.

Where is he now? In 2013 Brescia opened a hair salon in Costa Mesa called Brush Your Hair Salon by Justin Bobby Brescia. It has since closed.

Biggest claim to fame: Before Britney and KFed, the greatest pop star and back-up dancer love story belonged to Jennifer Lopez and Cris Judd. The two met in late 2000 on the set of her music video for “Love Don’t Cost a Thing” and married after a brief one-month engagement. After nine months of marriage the two called it quits in 2002.

Where is he now? Judd, now 45, continues to dance and has since remarried.

Biggest claim to fame: Having a top-40 Billboard single in 2001 with her wannabe-Britney track “I Wanna Be Bad.”

Where is she now? Since then Ford has had roles in a few small films and appeared as a contestant on Dancing With the Stars in 2006.

Where is he now? Cabrera is still making music, he recently released a new EP — and he’s apparently tamed his hair too.

Biggest claim to fame: Having a few minor hits in the ’90s (with singles “Oh Carolina” and “Boombastic”) followed by a couple of huge hits in the early ’00s with singles “It Wasn’t Me” and “Angel” off his album Hot Shot.

Where is he now? Shaggy continues to perform and make music.

Biggest claim to fame: Being Brody Jenner’s friend on The Hills.

Where is he now? Delgado is a currently a club promoter, and last year he welcomed his first child with his wife, Shopatrend co-founder Jennifer Acosta.

Where is he now? In a recent interview, Eamon said he is currently finishing up work on his new album.

Where is he now? Davis has kept a lower profile over the last several years. Although last year he — along with his two brothers, Jason and Alexander — was sued over alleged fraudulent money transfers his mother Nancy made to him before filing for bankruptcy.

Where is she now? Lady Sovereign left her record label, Def Jam, after a dispute and released one more album independently, 2009’s Jigsaw.

Where is he now? Trendy tried to continue to extend his 15 minutes of fame after Anna Nicole’s death in 2007 by appearing on Fox’s Gimme My Reality Show! He is also still an interior designer.

Biggest claim to fame: Co-starring on MTV’s Jackass (which he also co-created), as well as his own spin-off series Viva La Bam and Bam’s Unholy Union.

Biggest claim to fame: One of the early breakout stars during the first season of American Idol. Starr finished seventh during the competition.

Where is she now? Reportedly troubles with her record label, RCA, “stalled” her singing career. After the show Starr did appear in a few guest-starring roles, most notably on CSI in 2003.

Where is she now? Tweet recently announced in an interview that she has a signed a new record deal and is re-teaming with Missy Elliott and Timbaland to work on it.

Biggest claim to fame: Starring in A Walk to Remember, as well as starring roles on TV’s Once and Again and ER.

Where is he now? West is currently starring on the WGN America series Salem.

Biggest claim to fame: Making tween-age girls everywhere* have emotional meltdowns every time he hit the stage to sing on the sixth season of American Idol.

Where is he now? In 2012, the Daily Beast tracked down Malakar, who was living in Queens, New York, and working as a bartender at an East Village bar. He stated that he had been taken advantage of financially by former managers and that he was working on his self-produced debut album.