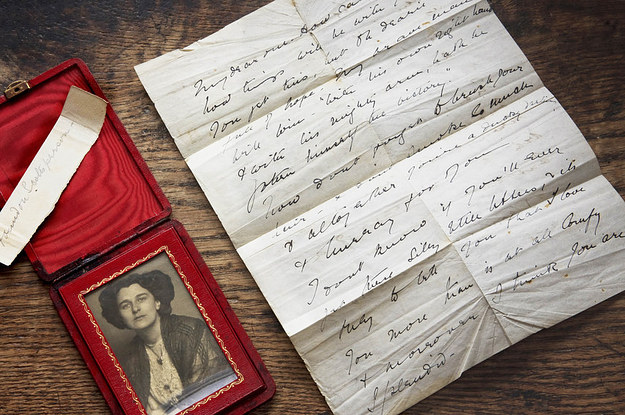 To your partner, to your kid, to Netflix.

1. Don’t worry that love letters are a thing of the past.

“Just another little note to tell you how much I love you. You are the best wife any man ever had.” USMC Archives / Via flic.kr

“People love to know how loved they are,” Samara O’Shea, author of For the Love of Letters: A 21-st Century Guide to the Art of Letter Writing, tells BuzzFeed Life. And that desire is timeless. O’Shea says a love letter is “what will last, what will be remembered.”

2. Consider writing a love letter to someone who is not a romantic partner.

A signed letter from Albert Einstein to his stepdaughter Margot, 1931. Hebrew University of Jerusalem / Via Getty Images

Some of the most beautiful letters are written from one friend to another, or from a parent to a child.

3. Don’t worry too much about making it sound like A Love Letter.

“People shouldn’t try too hard to make it sound like what they think a love letter should be,” Bonnie Downing, an author and professional love letter writer, tells BuzzFeed Life. O’Shea suggests you avoid mimicking anyone else’s voice. “You can’t really go wrong; don’t put too much pressure on yourself to write like ‘letters of old,’” she says.

4. If you don’t know where to start, make “past, present, and future” the outline of your post.

This 1942 letter says, “In addition to being an inspiration you have also made me happy and given me something to live for and something to come back home to. I just couldn’t help telling you these things because I love you so.” USMC Archives / Via flic.kr

O’Shea recommends this format as your inspiration. Here’s how to let it guide you:

Past: Write about when you first met or — even better — the moment you fell in love with them or your love deepened.
Present: Share what the person brings to your everyday life. O’Shea suggests calling attention the little things you love about them (like how she looks when sipping her coffee or how he always has the perfect reaction gif for every situation).
Future: Talk about things you’re excited to do (travel, start a family) and your shared dreams. According to O’Shea, this communicates “I’m here and I want to be here for a long time.”

5. Start with a for-your-eyes-only rough draft.

Just get all your thoughts on paper, Downing says. Then you can go back and organize and edit them.

Antarctic explorer Robert Falcon Scott’s body was found with this picture of his wife Kathleen and the last love letter that she wrote to him. / Via ITV / Rex/REX USA

According to Downing, the small details are particularly important to writing a meaningful letter because they make people “feel seen and appreciated.”

7. If you’re at a loss for words, it’s OK to include quotes.

An early collection of poems written by Bob Dylan in 1960. Stephen Chernin / Stringer / Via Getty Images

Downing says if you’re not a person who expresses yourself in words, “it’s OK to ‘cheat’ and borrow a quote from someone else.” O’Shea suggests that if you go that route, you should stick to ones that really remind you of the person or of your feelings for them.

8. Don’t worry about the length.

“Don’t try to make it long if that’s not you,” Downing says. Write what you have to say, whether that’s three pages or three sentences.

9. Remember to write it for them, not for you.

“Don’t write the type of love letter you want to receive,” O’Shea says. “Write what you think they’d appreciate.” Keep their communication style and the way they show love in mind.

10. Forget about how it looks.

Letter from Johnny Cash to June Carter. House of Cash: The Legacies of my Father, Johnny Cash / Via lettersofnote.com

Don’t stress about finding fancy paper that reminds you of days of yore. And if you have terrible handwriting, “just make it legible,” O’Shea says. If you’re really worried about it, you could hire a calligrapher (find one on Etsy) but it’s completely fine to just scratch it out with your own hand.

11. Keep in mind that the format isn’t as important as the message.

“It’s fine to make a little drawing, do something visual, or include little scraps or ephemera,” Downing says. She also says that some of the best love letters she’s seen have been emails or texts.

12. Know that it’s OK to ask for a love letter, or suggest exchanging love letters.

O’Shea suggests telling your partner, “I’d really love for you to write your feelings down for me sometime.”

13. The actual delivery doesn’t matter and can happen in a number of ways.

O’Shea says if you’re very shy, you could leave the letter for them to find when you’re not around. (Also consider whether they might prefer to read it in private.) If you’re giving them another gift, you could also hand it to them with it.

14. Consider turning your love letters into a ritual.

Letter from Dana Reeve to her husband Christopher on their fourth wedding anniversary, 1998. From the book Care Packages. / Via lettersofnote.com

Writing (or exchanging) love letters can be an incredibly meaningful — and delightfully inexpensive — gift that can easily be made into a birthday, Valentine’s Day, or anniversary tradition.

Letters from Winston Churchill to Pamela Plowden. One from 1899 says, “Marry me — and I will conquer the world and lay it at your feet.” Nigel R. Barklie/REX USA

“The best love letters strike a balance between considerate and uncensored,” Downing says. “You should feel really exposed, really raw. You have to feel vulnerable for it to mean something.”