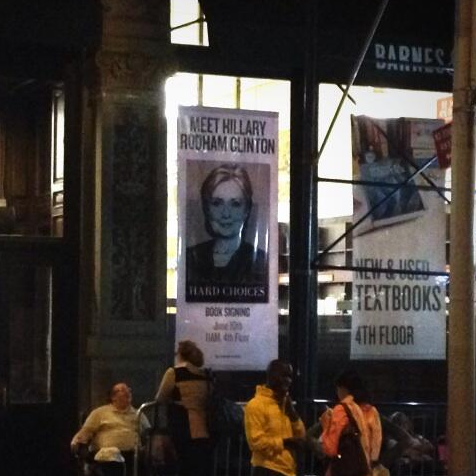 The line for Hillary Clinton's Barnes and Noble signing is ridiculous. Too early in the morning for all that.

It’s always too early for that.

And some Hillary devotees refused to wait until morning to line up for her book signing at a Manhattan Barnes & Noble.

There is already a man lined up outside Union Square ahead of Hillary Clinton’s appearance Tuesday a.m. pic.twitter.com/JJ6C4vJSCQ

One Clinton admirer showed up before 3 p.m. on Monday and admitted to Business Insider that he “can’t wait” to read Hillary’s “insightful” book, “Hard Choices.”

A line of HRC supporters has formed outside of the Union Square Barnes & Noble. Signing isn't for another 12+ hours. pic.twitter.com/8qQKu2IXlV

Hillary feels your pain, fans, and she’s totally down with the camping-out struggle. She was once so broke she feared she couldn’t pay the mortgages on her pricey homes.

Just don’t count on personalized notes or photo ops with likely 2016 candidate. She has rules for the riffraff.

Sorry folks, Hillary Clinton will not be personalizing the book or signing memorabilia and "NO" photography with the author. (Per her rules)

Whoa. Why I bailed on the line–>>> MT @Liz_Kreutz: Sorry folks, Hillary Clinton will not be personalizing the book or signing memorabilia.

Hope it was worth it, guys!

7am. Line for Hillary Clinton wraps from Barnes and Noble, up Park ave and around to 18th st. Signing is at 11.

Just a couple of people here to see Hillary (this is the third time the line turns). pic.twitter.com/WZqVqCj7HM

The line for Hillary Clinton's B&N signing goes around the block (at 8am). And it's filled with… http://t.co/gXvKucPaFu