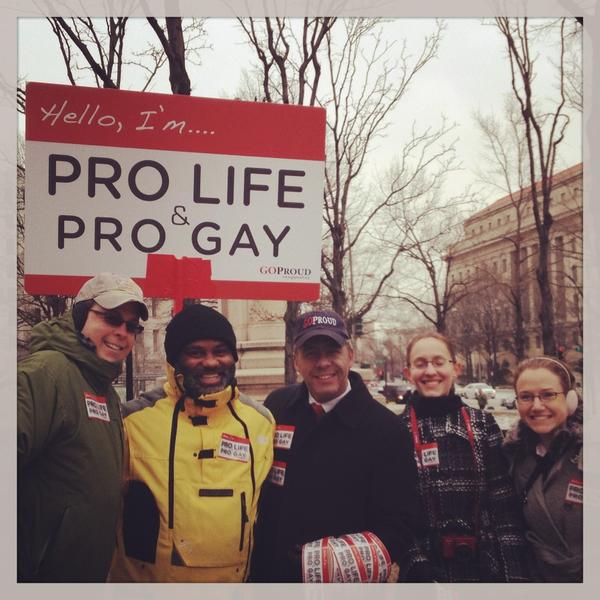 The Conservative Political Action Conference (CPAC) is less than a month away and the now-annual kerfuffle over the participation of gay conservative group GOProud was in full swing on Twitter this weekend.

Why is dissing @goproud an issue every CPAC? Can we just focus on crushing progressivism? Thanx. Love, A Dude Interested in Victory.

When GOProud co-sponsored CPAC in 2011, several conservative groups boycotted the conference. Later that year, the American Conservative Union’s board of directors voted to exclude GOProud from formal participation in 2012 and the welcome mat is still rolled up.

@sistertoldjah @dogwoodtiredkat There’s been no new news. CPAC board voted to exclude GOPROUD before CPAC2012.

In other words, they can’t sponsor (as they had in previous years), can’t have a booth. To a group/org, that’s a BAN.

Naturally, the liberal media presented this as unimpeachable evidence of the Right’s “H8″ and intolerance. But among conservatives on Twitter, there’s little controversy over whether to embrace gay conservatives as allies in the fight against the progressive agenda.

I wish we lived in a just enough world where media saw the conservative support for @goproud. It’s awesome #CPAC2013

The ratio of @goproud supporters to #CPAC-supporters on this issue is, no joke, about 20 to 1. And that’s AMONGST conservatives.

Many on the Right have harsh words for some of GOProud’s past decisions.

Shortly before the 2011 CPAC, GOProud co-founder Chris Barron branded conservative attorney Cleta Mitchell a “nasty bigot.” And in late 2011, the group attracted an avalanche of well-deserved criticism, including condemnation from its own members, for the appalling outing of Gov. Rick Perry’s chief pollster.

@jimmiebjr You mean like outing someone they don’t agree with as a vendetta? Yeah wonder why people forget that

But for many conservatives, this isn’t about deifying a particular organization while ignoring its warts. It’s about not marginalizing dedicated conservative warriors, gay or straight.

Conservatives want to destroy statists. So do gay conservatives. Why exclude them from #CPAC2013?

I want as many people with me fighting for freedom/limited government as I can get. Gay, straight, white, black, male, female–you name it.

This fight is not about CPAC vs. ACU. This is a much larger conversation we are having about gays in the liberty movement.

That said, if a gay couple wants to fight to lower taxes and help us be more free, then I want them on my team. Period.

why would you choose to alienate an entire group of perfectly good Conservatives? @cpacnews @acuconservative #GOProud #CPAC2013

Anyone can go to CPAC, regardless sexual orientation. But it sends a horrible message to exclude a gay conservative group from sponsorship.

THIS-> MT @amylutz4: #CPAC2013 still isn’t inviting @goproud? It’s about time the welcomed them into the conference.I don’t see the problem.

We all want to kick out the progressives and leftists who are ruining America. So does @goproud. Why exclude them?!?!?!?!

I am a Conservative: If you have to be a jerk to someone, be a jerk to the socialist, not the guy who won’t compete with you for chicks.

And here’s something else the mainstream media won’t tell you: It’s not just squishes criticizing CPAC.

Hey @cpacnews, the folks agreeing with me aren’t hipsters or squishes. These are hardcore cons who love guns and God and hate progressivism.

Plenty of social conservatives are eager to fight liberalism alongside gay allies.

Y’all know I have strong opinions that oppose gay marriage, but I think it’s stupid that @goproud isn’t allowed at #cpac13. Really stupid.

As a socon, I don’t think @goproud should have been banned from @cpac. Lets unite on our common ground to defeat progressivism.

@gpollowitz @goproud I’m conservative, against gay marriage but can’t understand why CPAC would do this.

Most of ppl I know from @goproud are vastly more conservative than many of the groups allowed at #CPAC. Everyone should get seat at table.

I don’t support same-sex marriage. But I support our friends who want a place at our table to have a conversation. Shame on you @cpacnews .

<—- SOCON who is pro traditional marriage and loves @goproud‘s patriotism. Pls don’t paint me into a corner. You’ll lose 🙂 #tcot

In fact, CPAC welcomes many speakers who disagree with the ACU on crucial issues.

So #CPAC will ban fellow conservatives but allow someone like Chris Hayes to participate? SO MUCH FAIL.

Yes, MSNBC host Chris Hayes received an invitation to speak on a CPAC panel this year. That’s the same Chris Hayes who said he was “uncomfortable” calling fallen soldiers “heroes.”

@sistertoldjah Didn’t they let Frum sponsor something in 2011? I seem to recall signs and stuff. @alwaysonoffense @becketadams

If we let the libertarians do their thing at CPAC, why not @goproud?

Wait so CPAC is allowing that racist idiot Derbyshire to be involved but not @goproud?WTF

At least one conservative blogger suggested a free market solution.

Get some donors to throw millions of dollars at me to start an annual conference and I’ll make sure @goproud is there. How’s that?

Q from earlier: GOProud shldn’t have been ‘banned’ from CPAC, but it does bring up a Q: Where SHOULD CPAC draw the line on invites, if any?