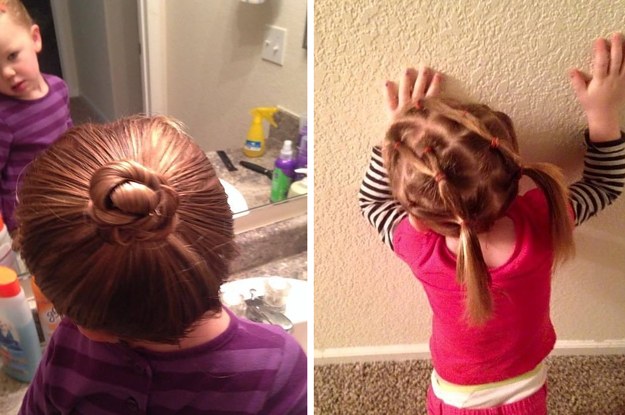 An early contender for Dad of the Year.

1. Greg Wickherst’s daughter, Izzy, spends most of her time living with him after he split with her mom. But he’s always shaved his head, so the hair styling department is totally foreign to him.

3. When 3-year-old Izzy’s hair started getting long, Wickherst realized he could barely do a ponytail.

“At that point I was like, I want to try different styles,” he told BuzzFeed News. “I didn’t want to be the dad that just didn’t know how to do my daughter’s hair.”

5. So the Pueblo, Colorado-based dad turned to the cosmetology department at IntelliTec College, where he works as an admissions representative, to give him a little help.

Wickherst stopped by on his lunch break and asked for some help from the program supervisor, who set him up with a cosmetologist.

9. “I spent a couple hours just working on a mannequin and she showed me how to do a bun, a French braid, all the different styles,” he said.

11. “It blew my mind how easy it was to do a bun,” he said. “I thought it was something super special, like real intricate, especially the one where you don’t finish pulling the ponytail.”

“I thought, Oh my god, that’s so pretty for something that’s so simple,” he added. “I don’t think most guys know that it’s that simple.”

13. Now he even tries to come up with his own new hairstyles for Izzy — sometimes it’s a success, and sometimes not so much, he said.

“Last weekend I ended up with 10 ponytails in her hair and I tried to put them together and it didn’t turn out very well,” he said, laughing. “It looked OK, but it looked like imitation cornrows.”

15. Now, he’s basically become “the hair dad” on Facebook, where he shares the pictures of his creations, and where other parents often send him tutorials of new hairstyles.

Several moms have even asked him for help doing their own daughters’ hair, he said.

17. Though he said the work of being a single dad can be hard to manage, Wickherst emphasized that he loves taking care of Izzy.

“My favorite part of the day is when I wake her up and get her out of bed and she’s still sleepy, so she nuzzles her face into my neck. … That love right there, feeling that love and that trust is the most rewarding part,” he said.