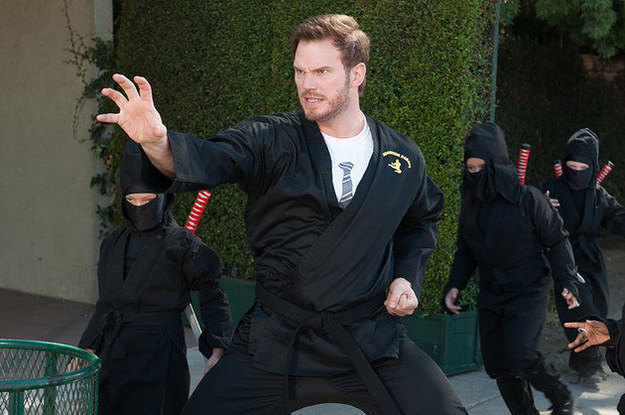 Parks and Rec co-creator Michael Schur tells BuzzFeed how those snazzy gadgets — including Gryzzl — were brought to life.

The final season of Parks and Recreation — which takes place in the year 2017 — has been a whirlwind of campaigning, tiny ninjas, and calzones.

This season has also introduced a handful of eye-catching technological inventions. So how did the creators come up with the slick designs of the not-too-distant future?

Comedy and forecasting ultimately dictated the gadgets’ form, Parks co-creator Michael Schur told BuzzFeed in a phone interview. After looking three years into the past to see how rapidly our current electronics morphed, they decided to stick to one overarching rule: No hoverboards. “That was a shorthand of saying we’re only going to 2017. This is not Bladerunner,” he added.

So they focused on two big innovations: clear plexiglass and 3D images.

“It was just extrapolating into the future and reading about Oculus Rift and stuff like that that seems to portend a three-dimensional future for all of us,” Schur said.

The tablets and phones are a product of Gryzzl, a chill internet company that’s bunking in Pawnee and is an amalgamation of Google, Amazon, and social media. And while their customized Gryzzlboxes may be comedic hyperbole, they’re not too far from reality.

In one scene, Gryzzl’s CEO, played by Workaholic star Blake Anderson, nonchalantly mentions that maybe Sweetums’ cohort Jessica Wicks (Susan Yeagley) should shut her device off before going to sleep. “Every year that goes by, this stuff gets a little more creepy and a little more invasive, and we turn a little more of ourselves over to it,” says Schur.

Except for Ron Swanson (Nick Offerman), of course, whose feelings on technology were perfectly encapsulated with one scene that featured him standing in a darkened threshold holding a battered drone.

When the show started shooting, the cast didn’t really know what the final products would look like.

They were instructed to treat the phones and tablets like they’ve seen them a million times before. The special effects were built to match what the actors were doing, which was just randomly swiping at the plexiglass, Schur said.

But when they began to edit the show, they found even more moments of actors doing scrolling motions. “And we’re like, goddamn it, now we gotta do another visual effect, because every time they move their hand, that means that the image has to change,” Schur recalled. “It’s been really funny because it’s not their fault! They were just standing there looking at nothing, and they were reacting just the normal way they would react.”

And if you consider an iPhone 3 vintage, that’s exactly the mentality the actors were told to portray. Andy (Chris Pratt) casually cycles through the news, and Ben (Adam Scott) wafts through each of his PowerPoint slides as though this feature has been around since Microsoft launched.

“The main thing that we said to all the actors was, â€˜These are not interesting to you,'” he said. “Never express any amazement about what you’re seeing, because no matter how crazy and amazing we make it, to you it’s like second nature at this point.”

But aside from a few fashion tweaks, everything else pretty much stayed the same.

The time jump also gave the writers the ability to tear Ron and Leslie (Amy Poehler) apart without having to watch it in real time.

“[Their friendship] is sort of like the beating heart of the show, and so that was something we wanted to do this year,” he said.

As for the pivotal lock-in scene in the fourth episode of Season 7, titled “Leslie & Ron,” Schur was the one who configured the Billy Joel lyrics as a method of torture. “We tried to figure out what would make Ron really break and crack — and break his silence — and Leslie making up rapid-fire lyrics to â€˜We Didn’t Start the Fire’ aggressively in his face was like, â€˜Yeah, that would work,'” he said. “I think that would work on any military prisoner too.”

But Poehler was the one who nailed the “ridiculous” lines, he said. “That’s Amy Poehler for you.”

The Parks and Recreation series finale will air Feb. 24, and while it is — understandably — sad to say good-bye to the acclaimed show, Schur knew it was the right time to sign off. “We’re very lucky, because there are very few shows that last as long as we lasted and get to go out on our own terms,” he said. “The sadness was mitigated very strongly by a feeling of accomplishment and a feeling that we had really been able to do things — we did it our way, as Frank Sinatra said.”

The Parks and Recreation series finale airs Feb. 24 at 10 p.m. on NBC.