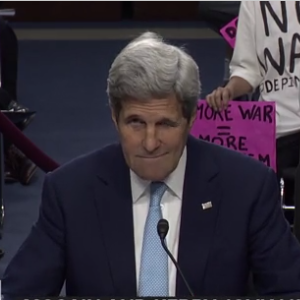 Did u all catch the wink between Kerry and McCain at the end of Kerry senate hearings. Can we trust them???

John Kerry has done a lot of things we wish he hadn’t done. During yesterday’s Senate Foreign Relations Committee hearing on ISIS, he did another one:

McCain and Kerry start to duke it out at an #ISIS Senate hearing and— did Kerry just WINK at him? http://t.co/ui6o164PdU

Y'all saw Kerry's wink at McCain during hearing, right? Just shows how it's all a game to them.

Except there’s nothing fun about that wink.

Shudder. That definitely has a spot in the pantheon of creepy winks. Right alongside this one: