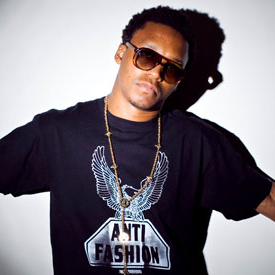 Not for making terrible music? MT @joshrogin: Lupe Fiasco just got thrown off stage after he went on an anti-Obama diatribe mid set.

What is a “Lupe Fiasco?”

Heh. Lupe Fiasco is a rapper not known for being a shrinking violet. Fiasco performed at an inauguration party last night and was kicked off the stage after speaking ill of President Obama. How dare he criticize The One?

The poster for the inaugural event which @lupefiasco was removed from after anti-Obama statements. HE WAS HEADLINING. twitter.com/ARBassa/status…

Event attendees, including Foreign Policy magazine’s Josh Rogin, reported from on the scene.

Lupe Fiasco just got thrown off stage here at the Hamilton Live after he went on an anti-Obama diatribe mid set.

So Lupe played one anti-war song for 30 min and said he didn’t vote for Obama and eventually was told to move on to the next song.

Lupe refused to move to the next song so a team of security guards came on stage and told him to go.

What the rapper do and say?

Lupe Fiasco played one anti-war song for 30 min and said he didn’t vote for #Obama and eventually was told to move on to the next song. #PT

So you mean to tell me for 30 minutes straight no one was even listening to what he was saying.. incredible. Lupe

Heh. Yes, they did. And Twitter continued to buzz over the rapper all night.

So Lupe Fiasco just performed an anti Obama set at an inauguration party in DC… And they say hip hop doesn’t have a message anymore.

Just so everyone is clear. Lupe Fiasco accused Barack Obama of not addressing right-wing racism. That’s why he was kicked off stange, ok?

@lupe Fiasco blowin it up at StartUp RockOn. fb.me/1qAl85ZSk

Chris Geidner, a BuzzFeed reporter, clutches pearls and thinks it was oh-so-tacky.

@chrisgeidner @bendreyfuss tacky indeed. But they didn’t ask him to be a sunflower. He came as a human being.

And the event organizer wasn’t so excited afterward.

Disappointed that an artist took opportunity to use an event celebrating innovation/startups to make a political statement. #StartUpRockOn

Then tries to deny the reason for the booting.

Lupe Fiasco was not kicked off stage for an anti-Obama rant. OFFICIAL STATEMENT from organizers here: hypervocal.com/news/2013/lupe…

Oh, it was just about crowd (a cheering crowd) dissatisfaction, you see. Blogger SooperMexican points out some hypocrisy there.

Oh you filthy liberals are so quick to whine when people protest against you, and so happy to support those to criticize your political opponents at any event…

Ding, ding, ding! Others point out the hilarity of the organizers being “disappointed.” Do they not know who Lupe Fiasco is?

Lupe Fiasco proving that there is room for politics and punk in hip hop.I’m amazed that he was booked given his public anti-war position.

Was White house surprised that Lupe Fiasco, who has called Obama a “terrorist” before, would use #inauguration as place to speak his mind?

They booked Lupe Fiasco for the presidential inauguration? Have they heard his lyrics?

Lupe Fiasco proving that there is room for politics and punk in hip hop.I’m amazed that he was booked given his public anti-war position.

It’s funny that people are upset that Lupe said what he said. He’s been critical of Obama since 2007. That tiger went tiger.

Why’d you hire Lupe Fiasco to be on stage for an Obama Inauguration celebration? Either it was done for a reason or they just plain stupid.

Had the event organizers read Twitchy or, you know, googled, they would have know. Here’s a heads-up for next time:

Or, his Wikipedia page.

the took lupe fiasco off the stage because he was singing an anti war and anti obama song. wtf happened to freedom of speech

my homeboy #Lupe man.I thought we were protected by the 1st amendment, they cant do that. at least he speaks the truth unlike politics

Given his place and time wasn’t the best, he still has freedom of speech, but apparently not #Lupe

It was a private event, so that doesn’t apply. However, other Twitter users point out the hypocrisy. When was the last time a performer was booted for rants against Republican politicians or policies? It’s only frowned upon, to the point where one is booted from the stage, if aimed at The One.

It’s okay for Kanye to diss George Bush. But it’s not okay for Lupe Fiasco to do the same to Obama. #DoubleStandards

Kanye calls Bush racist on live tv and its cool, but Lupe Fiasco speaks his mind and he gets thrown off stage. A lot of respect for Lupe

How dare a musician criticize a politician! MT @joshrogin Lupe Fiasco thrown off stage after he went on an anti-Obama diatribe mid set.

Hate when celebs get political onstage, right Kanye? MT @joshrogin: Lupe Fiasco got thrown off stage after he went on an anti-Obama diatribe

Bingo. And these folks sum it all up with signature Twitter snark.

So, apparently Lupe Fiasco, performing at some inaugural event in DC, has commited lèse majesté and has been booted off his own stage.

TREASON. MT @kerikaeindc So, @lupefiasco rips on Obama during performance & he’s shut down. Security escorted him offstage, cameras in face.

Wonder if Lupe Fiasco will be tossed in the same cell as that YouTube video maker.