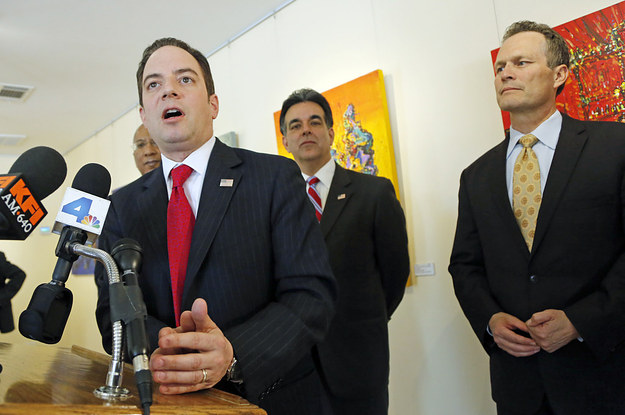 GROW Elect has helped get 90 Latino Republicans elected in California, all with an eye towards diversifying the Republican Party. But will their strategy of helping to elect moderates work in more conservative states?

In the state of California, more than 90 Latino Republicans have been in elected — in just the last two years.

And there’s a group behind this eye-popping statistic, working to diversify the Republican Party one local and municipal election at a time in California.

“What we’re trying to do with GROW Elect is create a party where Hispanics can see themselves — where they actually see themselves — not as a community that can be outreached to, but as voters and citizens that are included,” said Ruben Barrales, the group’s CEO and a George W. Bush administration veteran.

GROW Elect, originally considered yet another subpar outreach effort by state party leaders before establishing a track record of success, has spent $600,000 thus far, but says it provides more than financial support to candidates, offering a deep understanding of what works in California.

They say this granular, local approach means they can’t head to another state with the same blueprint and replicate what they’ve done, but they are already establishing connections with local leaders in Texas and the Southwest.

Luis Alvarado, a Republican strategist and consultant for GROW Elect, says a lot of work goes into vetting candidates who want to make a difference in their community, but says a key for the group is that they have no interest in a specific political ideology.

“Our main thing is we don’t care if you’re a very conservative or very moderate Republican, our interest is not in the political aspect, but we would help you because you want to serve your community,” he said.

Barrales, who was in San Antonio Tuesday at a Latinas Represent event, a nonpartisan group trying to recruit more Latina elected officials, said he was there to find local leaders. He pointed to Southwest states — Colorado, Nevada, New Mexico, and Arizona — some of which are turning increasingly blue due to growing Latino populations, as the next target for his initiative.

Jose Parra, a Democratic strategist who worked for Harry Reid and has worked extensively with Latinos in Nevada, believes the less ideologically pure GROW Elect strategy will work well in a state like Nevada — pointing especially to the state’s Republican governor, Brian Sandoval.

Sandoval is not known as a die-hard conservative: He is pro-choice, he supports the Common Core federal education standards, and just this week, he declined to support a Nevada effort to join the lawsuit against President Obama’s immigration actions.

“As he has seen the electoral trend in the state, he has supported legislation that is pro-immigrant and pro-Latino,” Parra said, pointing to the governor’s support for a bill that would make it easier to teach English as a second language.

The strategy of embracing moderate Latino Republicans might work in Nevada and Colorado, but Arizona would be a different story, Parra argued.

“That could be,” Tim Sifert told BuzzFeed News. “It doesn’t sound too far off base. It goes to the idea that Arizona does have a unique electorate, part of it is its history, part of it is its geography. It’s hard to draw parallels from one state to the next.”

“I’m unapologetic, I want to help strengthen the Republican Party and help find qualified Latinos and help them get elected. That’s going to help the party grow,” he said.

He said California is a place where a seemingly one-party system has been bad for the Latino community.

“Naturally as a young adult, I was a Democrat until I realized, looking around my community, that the lack of competition didn’t provide the kind of attention my barrio needed,” he said. “Latinos should not allow their vote to be monopolized by one party.”

While the organization has shown success, it only first delved into statewide races in 2014. Still, its backers argue that going into communities where Republicans don’t normally show up is the engagement often talked about but seldom undertaken. “The idea is to elect Republicans that then can be role models,” Barrales said.

Jennifer Korn, the deputy political director for the Republican National Committee, said she knows Barrales well from working with him on the â€˜Viva Bush’ campaign. She said she was initially reluctant to join the RNC when Chairman Reince Priebus asked her to come on board because she didn’t believe the party was serious about reaching into the Latino community but has seen outreach nationally and on the state level.

“The more you get Hispanic Republicans to talk to other Hispanics, the more you realize Hispanics are willing to vote for Republicans if given respect and being spoken to,” she said.

She also believes the strategy in the Southwest will work — Sen. Cory Gardner won his race in Colorado, one of the states with growing numbers of Latinos, and Nevada and New Mexico have Latino governors in Sandoval and Susana Martinez.

She pointed to the city of Pueblo, a Democratic stronghold where Gardner did 5% better than the previous Republican and his opponent, Mark Udall, did 7% worse.

“The criticism of Republicans in the past is we don’t show up in heavily Democratic and heavily Hispanic areas,” she said. “We just hit it head on and said we’re going to put an office there, have staff there, also Hispanic staff, and get the message out. One it’s about being there and two is having a great candidate.”

Alvarado said he hopes more of these great candidates are Latino, noting that in the last couple years with GROW Elect he has done everything from help with messaging to taking phone calls at midnight from “a candidate who had to help their wife stop crying because someone called her fat on one of the blogs.”

And the candidates appreciate the diverse suite of offerings from the group and credit them with helping win their races.

Ignacio Velazquez, the mayor of Hollister, California, said his disadvantages were clear in a heavily Democratic district that is 66% Latino. As one of four candidates, and the only Republican, no one thought he could win. Velazquez said mailers the organization sent out, which cost GROW Elect $6,000, helped to reintroduce him to the community.

“To this day I get people telling me I’m the first Republican they ever supported,” he said. “They always tell me, â€˜Don’t let me down.'”