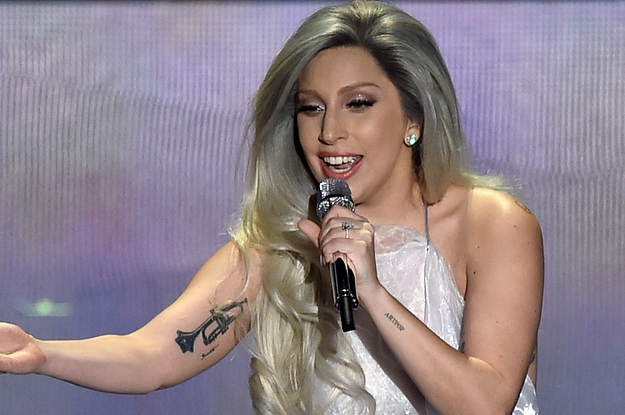 Mother Monster has ALWAYS been the best.

1. So you probably saw Lady Gaga’s EPIC tribute last night to The Sound Of Music.

If not, watch the full performance ASAP here.

2. Like, Gaga came out in this stunning white ensemble and BROUGHT. THE. HOUSE. DOWN.

3. It was so powerful it legit had Julie Andrews, AKA Maria Von Trapp herself, in TEARS.

Anyone else shocked? @ladygaga showed exactly how classy she is tonight. Very beautifully done. Her versatility amazed me tonight. #Oscars

8. So if you think Lady Gaga is just some pop star with some crazy outfits, you need to SIT YOUR ASS DOWN and receive an education about what an epic artist she truly is.

9. Let’s start with her voice, because DUH. Have you heard her stripped-down acoustic version of “Edge Of Glory”?

10. How about her Grammys duet with Tony Bennett? It’s obvious that Gaga doesn’t just have a voice for pop… but for jazz and theater.

11. Now let’s go way way back, before she was famous. She basically was DESTINED for greatness, because she learned to play the piano at age four and was accepted to the Juilliard School at 11 …

However, she didn’t attend.

12. … and she also studied at NYU’s prestigious Tisch School for the Arts.

13. Just check out this ethereal performance from when Gaga was at NYU. It’s clear the talent has ALWAYS been there.

14. Y’all should ALSO know Gaga signed her first record deal at the ripe old age of 19.

You were probably doing keg stands as a freshman at the same age.

15. And you want to talk talent some more? Gaga wrote her lead single “Just Dance” IN 10 MINUTES.

Can your faves even?

16. So yeah, Gaga knows a thing or two about writing and producing music — she’s churned out tracks for Britney Spears, Fergie, the Pussycat Dolls, and Jennifer Lopez, as well.

She ain’t just some vocalist for hire like some other pop stars out there! NOT NAMING NAMES but you know who you are.

17. But Gaga ALSO is an incredible live performer. Maybe you remember her insane dance moves… sick vocals… and crazy piano skills from her Grammys performance with Sir Elton John?

You probably should watch it. Right NOW.

18. Or what about her fiercely theatrical VMAs performance of “Paparazzi” in 2009 where she DIED ON STAGE???

19. We also CANNOT forget her truly inspired music videos. Like “Bad Romance” which has been viewed more than 600 MILLION TIMES on YouTube alone.

AND IS ALMOST 12 MINUTES LONG.

21. Or how about “Telephone,” where Gaga had the balls to bring in Queen Bey as a FEATURED artist?!?!

22. We can also get statistical. Let’s start with her SIX Grammys…

25. This also wasn’t the first time Gaga was called in because a major event needed a one-of-a-kind headliner. Maybe you heard about the time she played for the MOTHERFUCKING Queen of England…

Check out her full performance here.

26. … or when she closed out NYC’s famed Roseland Ballroom with a string of seven — SEVEN!!! — sold out shows.

27. Basically, if you had a set of eyes and ears and were paying attention to music the past few years, last night’s performance should NOT have been a surprise.

28. So let’s recognize Gaga for what she REALLY is: the baddest, most talented chick in the GAME.