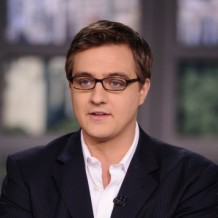 The MSNBC diversity cops have reportedly selected Chris Hayes to replace Ed Schultz in the 8:00 p.m. time slot. Schultz will slink away to an oh-so-coveted weekend gig on the network.

Mr. Hayes, a liberal intellectual who has hosted a well-regarded weekend morning program on MSNBC for the past 18 months, is a protege of Rachel Maddow, the highest-rated host on the channel. He will become the lead-in for her 9 p.m. program, “The Rachel Maddow Show.”

The change is predicated on the belief that MSNBC can win a wider audience with Mr. Hayes than it did with Mr. Schultz, a champion of the working class whose bluster didn’t always pair well with Ms. Maddow and the channel’s other prime time program, “The Last Word with Lawrence O’Donnell.” Mr. Hayes, on the other hand, is just as wonky as Ms. Maddow and Mr. O’Donnell, and is a regular contributor to both of their programs.

Ah, the unbearable whiteness of being an anchor at monochromatic MSNBC.

Hi @msnbc Can you explain why you only have white people in prime time? Thanks

Come on, guys. It’s about time MSNBC had “one of America’s leading conservative voices” anchoring a prime time slot! Isn’t that diversity? Media Matters says Chris Hayes is good enough — some of his best friends are bringers of increased diversity!

If his weekend show’s guests are any indication, Chris Hayes’ new show is likely to bring increased diversity to MSNBC’s evening lineup.

And besides, there’s still room to diversify the MSNBC lineup, right?

@hunterw not sure, but i’m betting Ezra gets Chris’s weekend time slot.

Now comes the part where all the juiceboxers on Twitter kiss Chris Hayes’ ass. “Please book me!”

Huge congrats to the great @chrislhayes, who’ll be the new 8pm host on MSNBC! mediadecoder.blogs.nytimes.com/2013/03/14/chr…

More seriously, congrats to @chrislhayes and friends on his team.

Kudos to my pal @chrislhayes – one request: keep the @uppastryplate! mediadecoder.blogs.nytimes.com/2013/03/14/chr…

It looks like @uppastryplate will have to be replaced by cocktail tray and hors d’oeuvres platter. Congrats to @chrislhayes on the new gig.