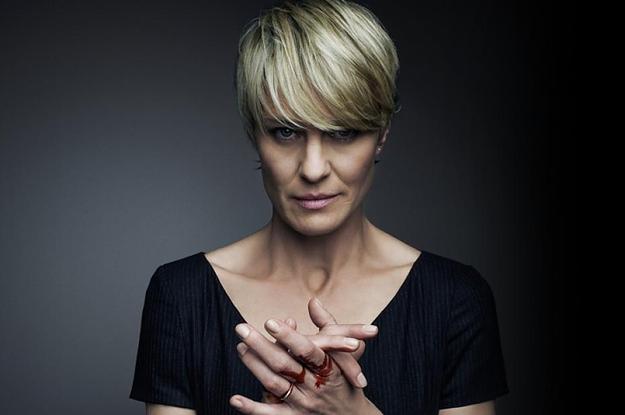 Claire Underwood’s hair holds all the secrets of the White House. Spoilers abound.

(Before you begin, I’m warning you there are third season spoilers ahead. You’ve been sufficiently warned.)

There are particular movements you may do without noticing, thousands of times in your life. Tucking hair behind your ear, twirling a strand while you write, blowing it out of your face while you move. The run, the twirl, the pull. We negotiate dead strands with living fingers, pampering and twisting, brushing, the comb. A drastic haircut in times of change, a dye job for rebellion. There is something freeing about watching all your hair fall to the floor around you to the hum of a clipper or the slice of a scissor — metaphorically and physically, everything is gone. The wind is at your neck, now move.

That cutthroat efficiency is why so many professional women choose the crop, and it’s likely part of the reason behind Claire Underwood’s on House of Cards. Can you imagine her with a perpetually blown-out sea of hair? She has, instead, the corporate mom cut: the cutthroat sister of the soccer mom, unconnected to the Rachel, and only distantly related to the manic pixie dream girl the way humans are related to Hades in hell. Since the beginning of the series, her look has been ambiguous: short but not unstylish, capable and cool. It is a constant in the series the way the balance of power is not. It shifts only slightly to suit occasions — a swirl for a ball, something butch when the occasion may call. But never anything too drastic, and nothing noticeable, or worse: distracting.

She is, for the first two seasons, the quiet doom of the show, her feelings iced over to protect her and her own. In fact, the only time you really see her fret about her hair for most of the series is Season 2: a blink-and-you’ll-miss-it breakdown on the stairs. And even then, she pats her hair like she’s clamping down her emotions — a knot in her throat and then she’s gone. Later in that episode, Claire’s seen rowing in her bedroom, shown from the back of her head: steady pace, not a hair out of place, dark hair growing at the roots, fading up to the frost. If Mellie is the Southern hospitality first lady on Scandal, with big hair full of secrets and rage and grief, Underwood is the chill of the Capitol’s halls. There’s nothing to see here, carry on.

On so many other shows, there’s a conscious unspoken maintenance of traditional womanhood — even in the direst of times, a girl’s gotta have a blowout. The maintenance of a woman is just par for the course of television, or has been for too long. (It is not the case with Shondaland, but that is another think piece, for another time.) The perpetual blowout, though, is not for Claire Underwood. She has no length of hair that needs it. She is kept, yes, always, but not because she has a secret team of hairstylists living at home to plot with, but because she’s cultivated a life so slim and brutally self-determined it’s not necessary. She can get up and go, quietly and whenever she decides is the perfect time. When she does decide to move, it’s with the silent death an iceberg is to a ship off course. You don’t see it coming until it hits you. The foundation of her character, actually, is being this kind of inevitable, unmoving force. David Fincher gave Robin Wright this single directive about the Claire he wanted to see on the screen: “Don’t move. Don’t move. Claire is a bust.”

In Season 3, all of this shifts rapidly — both her cool facade and her hair, too. Claire Underwood has a heart now, and it makes her visibly sick. She hovers over the kitchen sink after asking for help from Francis. She wears more silks now, soft fabrics for a softer, unsure woman she’s never been before. For so long, we saw her as this stalwart, inevitable force. Now we see her fidgeting: hands always in the air, or trying to go for a run — pacing, or glancing, isolated from Francis where before she had always been luxuriously, wholly, alone.

We see her stumbling to find her own power as U.N. ambassador and use the discomfiture of being a woman to get it: We see her fixing her makeup while negotiating with the Russian ambassador. We see her peeing and talking coolly to him about the president at the same time. And later, we see her too, discussing hair color and voter preference with the presidential campaign staff. “Iowa voters love the blonde,” an advisor says, and Claire takes a moment to mourn her freshly brunette locks, before returning to her ice blonde. It’s not entirely blonde, though — the roots at the neck are deep brunette, like she couldn’t quite let them go. The unspoken efficiency of her appearance in the past few seasons has shifted into a conscious, calculated power move in a way it hadn’t been before. Her power isn’t really hers now, not anymore. Before, she was an iceberg, a marble bust, half of the atom bomb of the Underwood duo. But now, not so much.

In the final episodes of the latest season, Claire’s hair becomes frenetically colored: her hair color changes from brunette to icy blonde, to streaked and highlighted sand, as if it can’t quite decide when to stop. She’s come undone. She’s walked out on Francis, wind at her neck. Time to run.