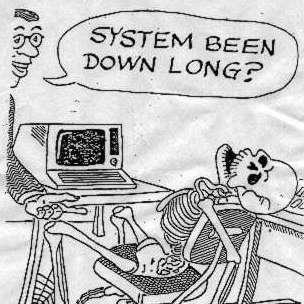 WHERE WERE YOU DURING THE GREAT TWITTER OUTAGE OF 2012???

It was a dark day today. A very dark day.

I CAN QUIT TWITTER ANYTIME. *rocks/convulses in the corner*

Guess what? You just lived thru Mike Bloomberg's version of Twitter Lite.

For more than an hour, Twitter was unreachable, with not even a fail whale to comfort many of the tweet-less. At 12:33 p.m. EDT, a short post appeared on the Twitter status blog:

Users may be experiencing issues accessing Twitter. Our engineers are currently working to resolve the issue.

Twitter has come back from the dead. Mubarak? Wait & see. #TwitterBackUp

Twitter … dead? We refuse to believe such a thing is possible. Where’s the death certificate?!

Hey guys! Looks like http://t.co/e1ggCQkm and all Twitter clients are recovering. Sorry for the trouble! Let those Tweets take flight!

So what went wrong? We demand answers!

Well @BarackObama? What do you intend to do about this twitter outage? DEMOCRACY DIED TODAY!

No official explanation from our Twitter overlords yet, but here’s one plausible suggestion.

Pesky headwinds! For now, it’s back to work as we try to reclaim some semblance of our former lives.

Attention @TwitchyTeam. Your unannounced vacation is over. Back to work! *whipcrack whipcrack* 😉

I went to a "Twitter is Down Google Hangout" but Gary Johnson was the only guy there.

Something I found out while Twitter was down: MySpace is still around. #WhoKnewf

A sobering reminder of twitter's therapeutic qualities – w/o you folks to vent with, WH press briefings are unbearable.

Twitter was done, so I wrote out pithy 140 character messages and snail-mailed them to my friends.

My life has meaning again. #twitterocalypse (or is it #twitmageddon?)

During this lengthy and painful twitter downtime, FB decided that #Hashtagging is now acceptable. #JustATweeter

I like when Twitter goes down because it gives me time to ask my family what their names are again.

But guys, take it easy on the Twitterocalypse‬ tweets, m’kay?

We can’t go through this again. We just can’t.

Twitter has gone down again. How much longer must we be jerked around like this? This is a constitutional crisis, dammit!

Our buddy Ben Howe has exclusive footage of one man’s reaction to Twitter’s meltdown:

That man speaks for all of us.

It’s back. Or is it? MAKE UP YOUR MINDS, TWITTER GODS!

Annnnd it’s back down.

We give up on updates. Darn you and your temper tantrums, Twitter! *Shaking our fists*

We fibbed. We have one more update. A Twitter spokesman blamed the outages on a “cascading bug.”