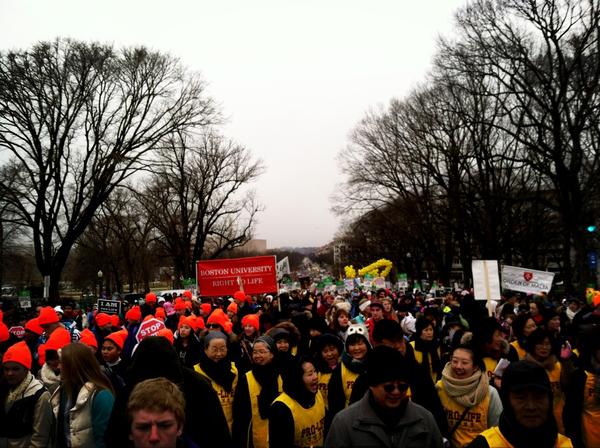 1/2 a million people at #MarchForLife .. where's the media hmmmm

There’s no official count yet, but half a million pro-life activists were expected in Washington, D.C. today to join the 40th annual March for Life.

.@march_for_life shares that this year, they’re getting an official estimate for the #marchforlife this year.Yay for #prolife math.

Preliminary estimates indicate hundreds of thousands did indeed brave frigid temperatures to encourage a culture of life and remember the heartbreaking 55 million human lives lost to abortion since the 1973 Roe v. Wade decision.

Its snowing & bitterly cold, but hundreds of thousands of #ProLife activists are undaunted. #MarchForLife

The crowd as it looked from the stage during the #marchforlife rally. We cannot see the end! #prolife twitter.com/March_for_Life…

Recognizing those participating in today’s #MarchForLife. We must protect life. twitter.com/GOPLeader/stat…

Standing in a crowd of hundreds of thousands of pro-lifers! #marchforlife twitter.com/LifeSite/statu…

Record-breaking crowds of young activists honoring life and speaking out against a toxic culture that treats children as inconvenient and dispensable — sound newsworthy to you? If hundreds of thousands of pro-life activists march, do the media make a sound?

Dear mainstream media. Half a million will #MarchForLife in DC this morning.And you’re covering the on-line dating habits of athletes.

Hi @nbc, there are thousands of people marching for life today in 15 degree weather. Where are you?

In the past, media ostriches have deliberately buried their heads in the sand during the March for Life.

As John Hayward notes at Human Events, media coverage of the annual event has ranged from shallow, grudging acknowledgment to completely absent.

It doesn’t get analyzed, or portrayed as part of any broader social trend.  The press doesn’t ask what causes it to remain so strong, even after forty years of being sternly lectured that it’s fighting for a lost cause.  Pro-lifers give cheerful interviews to news anchors who would feel more comfortable sitting down with the dictators of North Korea or Iran; they wave happily into cameras held by quivering hands.  Media organizations that swoon when leftist organizations quote dubious statistics in some “noble” cause – climate change, gun control – scowl at the simple observation by pro-lifers that America is missing 55 million people due to the post-Roe abortion regime.

Will this year be any different?

If @cnn @msnbc and other media outlets air complete coverage of the #marchforlife then that means this cold weather shows hell froze over.

. @ap, 1000 people hunting for pythons in FL is important, but do you have reporters in DC?I hear stuff happens there too. #MarchForLife

Oh, you mean the mainstream media is ignoring the #MarchForLife? Well color me shocked!

I wonder if the liberal media is going to report on the #Marchforlife. In past years they have been silent. I’m thankful 4 @foxnews

But no one will know cause MSM blows RT @stevenertelt: #MarchForLifeAttendance Could Top Obama Inaugural Event bit.ly/UDj3LF

Every year the media mostly ignores the #MarchForLife, while giving hours of coverage 2 liberal protests that have 1/100 as many attendees.

But celebrity Julia and Obama tool Sandra Fluke draws tens of people to her rallies! This is just one of those pesky pro-life marches. Grab a broom and sweep that nonsense under the rug, lapdogs!

Code Pink could have four 60 year olds run around naked in a bank and it would get more coverage than 250,000 people marching for life.

There could be half a million people there this year, and the media just pretends it doesn’t happen. It’s mind-boggling. #MarchForLife

Point being our media is ridiculously corrupt and one-sided, which does not serve Americans or the Republic very well.

@usatoday proves that mainstream media can fairly and eloquently report on the #MarchforLifeusatoday.com/story/news/nat…

But few outlets covered the March for Life with the enthusiasm shown for Occupy protests and anti-gun rallies.

Fortunately, mainstream media bias couldn’t stop the massive social media reach of #MarchForLife. The hashtag trended for much of the day Friday as passionate advocates for the unborn tweeted about the heartening outpouring of support for life and human dignity.

The #marchforlife might not be on TV but it’s on Twitter.Can’t hide it media.

Click on @marchforlife and the trending hashtag #marchforlife to get the story most media refuses to give you.

#MarchForLife is trending! Lets keep it trending, since the #MSM is not reporting it.

Pro-life demonstrators might not capture the rapt attention of the mainstream media, but they’re capturing the hearts and minds of millions of Americans, young and old.

The #MarchForLife was awesome.It gets bigger every year and still the media ignores us.We are winning the fight. #ProLife

Pope tweets March for Life support: ‘I join all those marching for life from afar’

Pro-life Generation: Youth turn out in huge numbers to march for the unborn

‘F*ck you all’: Hateful pro-aborts spew venom at Marchers for Life