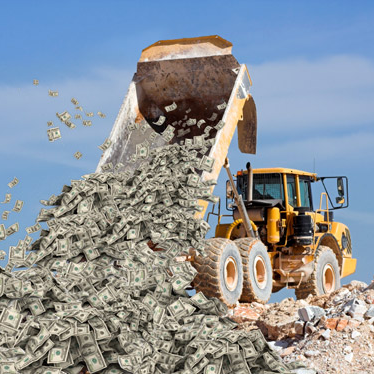 Hey, so, remember that time the Secret Service let a crazy man jump a fence and run around inside the White House? Well, according to Secret Service director Julia Pierson, that whole headache could’ve been managed much better … if only they’d had more money!

You caught that right? She just blamed "funding constraints"

Am I reading this right? The Secret Service couldn’t stop a White House intruder because it doesn’t have enough money?

When the head of an agency says the problem is lack of funding, that person literally has no idea what went wrong.

Or, that person just doesn’t want to face reality.

So, the White House front door was unlocked & alarm off because the Secret Service isn't diverse enough, and they don't have enough funding?

Has anyone in the Secret Service explained how more money would have stopped someone from crashing through the front door of the WH?

We didn't do our job right, give us more money. #ThisTown #SecretService

@charlescwcooke The go to excuse for government is "We don't have enough money." @iowahawkblog

There was a team in place at the White House, as there always is. It failed to do its job. It has absolutely nothing to do with funding.

We’re still unclear as to how more funding would suddenly render the Secret Service competent.

How exactly did lack of funding prevent the USSS from stopping the WH intruder? Do they pay per tackle? Are they all unarmed?

I have no idea how that could even work. Are agents reimbursed by the trigger pull? Do they only stand up for cash? Is it pay-per-tackle?

Someone should really find out how this all works.

@RBPundit the secret service coulda have gotten higher quality prostitutes if their funding had been better.

Oh well. At least the Secret Service’s ineptitude isn’t widespread or anything:

It’s lucky that this sort of incompetence and excuse-making is limited to the Secret Service or American government would be a total mess.