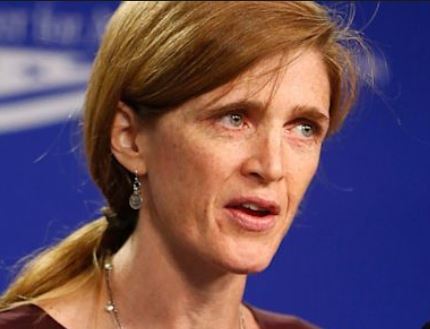 Did @AmbassadorPower just send the dumbest tweet ever or just of the week? https://t.co/VUIFpefB1z

Arguably the former. You see, this happened:

Samantha Power Says Daniel Pearl’s Death Was Part Of A Cycle Of Violence http://t.co/AfiyWROS5d via @WeaselZippers

Speechless. Twitter users were not speechless, however, and gave Ambassador Power the business over the baffling tweet about Daniel Pearl, the journalist kidnapped and beheaded by jihadists in 2002.

I really don't understand what this is supposed to mean. https://t.co/uPcLvtfG47

@JasonBWhitman Seriously — I'm not trying to cause trouble, it's really just….wha??????

@AmbassadorPower What specific steps would you have taken to avoid meeting his fate once captured? Or are you blaming the victim for that?

.@AmbassadorPower @DanielPearlFNDN Can you elaborate? What should Pearl have been accountable for? Should he have reconciled with Al Qaeda?

@AmbassadorPower Reconciliation? With people who cut his head off because he's Jewish and American? They referred to him as "the Jew".

“Those 3000 people in the twin towers were just being held accountable for their participation in capitalism.” – Ambassador Power, probably.

It’s not funny, because it could be true.

“@EWErickson: Why is the US Ambassador to the UN blaming Daniel Pearl for his own murder? https://t.co/fYbfqaG8f9 MT Amb Power is Disgrace!

Disgraceful, yes. But was she evil or just incredibly stupid?

Here are Ms. Power’s other tweets:

We must be vigilant in protecting the rights of the press. 2013 = 2nd highest # of journalist deaths and arrests all-time. @DanielPearlFNDN

They don’t really clear things up, do they?

Maybe this is just one of those not made for Twitter tweets.

Yep. The idiocy, it scorches.

@AmbassadorPower WHAT!?!?! No. You're missing the point in such a spectacular way that you land in a different universe @DanielPearlFNDN

Comedian Stephen Kruiser may have discovered the cause of her asinine tweet.

Thank you, @AmbassadorPower for taking the bold step to provide an example of the perils of sniffing glue.

And this Twitter user brings it all home with this key exit question to Amb. Power: