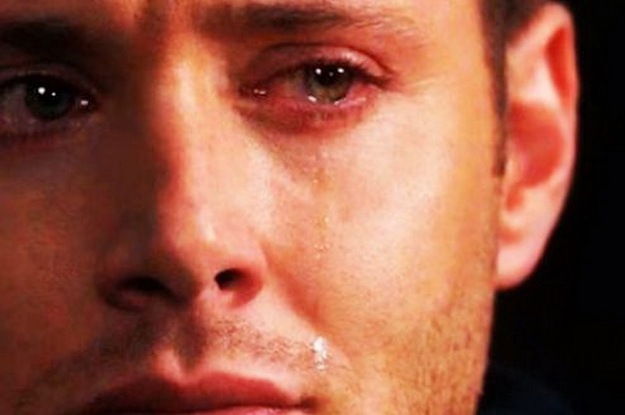 4. We’re told these things because strength has traditionally been one of the most defining measures of a man, and crying is seen as weak.

5. So we grow up programmed not to cry, and then when we become fathers we hear another message: “Never cry in front of your son.”

6. We’re told this because it’s our job to be a strong role model for our boys — to quite literally model strength — and if we were to cry in front of them we’d be showing weakness.

Or so the thinking goes.

8. Is it weak when the leader of the free world cries in the aftermath of devastation and tragedy?

Like when President Obama cried while addressing the nation after Sandy Hook.

Or when President Bush cried during a posthumous Medal of Honor ceremony for a fallen American serviceman.

10. Was Jon Stewart weak when he cried during the first episode of The Daily Show after 9/11?

11. Were Paul McCartney and Ringo Starr weak when they cried over the murder of their friend and bandmate John Lennon?

12. Was Knowshon Moreno weak when he was moved by the national anthem before an NFL football game?

13. Was Michael Keaton weak when he cried while thanking his son for his love and support at the Golden Globes?

14. Was Pharrell Williams weak when he was overwhelmed while watching a video of people all over the world performing his song “Happy”?

15. The reality is that the simple act of crying doesn’t make you weak.

16. If you’ve been a strong role model for your sons day in and day out, you’re not going to suddenly negate all of that by crying in front of them. You might, however, teach them other lessons. Things like…empathy.

When you cry for other people you teach your sons that other people matter, and that we’re all in it together in life.

When you cry, you teach your sons that they don’t have to let the expectations of others dictate how they live their lives.

18. The ability to give themselves a break.

Being strong is a wonderful thing, but sometimes it’s OK not to be strong. Sometimes you need to ask for the help of others. And there’s nothing wrong with that.

19. So the next time you feel like you need to cry, remember this: Real men do cry.

In fact, it’s good for both you and your son.